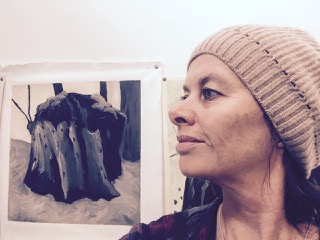 Van Elder was born in Brussels, Belgium.
After she graduated from UCL Belgium she moved to California where she received her MFA in Painting in 2003 from California College of the Arts, San Francisco.
Van Elder's work has been exhibted in Califonia, New York, and Brussels.
She was an affiliate resident at the Headlands Center for the Arts in Sausalito where she was a Tournesol Award finalist in 2007.
Her painitngs have been featured in New American Paintings and Studio Visit Magazine.
She currently lives between Northern California and Brussels.
Loading...